On Thursday January 11th, the students and faculty of the Waldorf School of Garden City came together to honor the life and legacy of Dr. Martin Luther King Jr. The entire student body took part in various service projects, both on and off the Garden City campus, that promoted the spirit of love and camaraderie.

The Ninth Grade traveled to Island Assisted Living in Hempstead, where students played games and completed art projects with the residents and even performed a seasonal song for them. Similarly, the Eleventh Grade visited the Holly Patterson Extended Care Facility in Uniondale, where they also played games, interviewed and enjoyed lively conversations with the residents.

The Twelfth Grade spent their day teaching third and fourth graders at John Lewis Childs Elementary School in Floral Park. The day was in partnership with the High School Heroes program of  the Junior Achievements of New York nonprofit organization. At the school, some of our Seniors introduced third graders to financial liberties, the characteristics of cities, and the importance of economic exchanges, while others worked with fourth graders to teach entrepreneurship and money management. According to Marie-Anne Harrigan, “It was a wonderful day that exceeded my expectations.”

The Fifth through Eighth Grades prepared sandwiches and cookies for guests of the Mary Brennan Inn Food Kitchen and Homeless Shelter in Hempstead, N.Y. Each sandwich and cookie was specially wrapped and placed in a uniquely decorated paper bag. Together the students prepared over 500 sandwiches for those in need. Keelah Helwig, Early Childhood Chair and Chair of the School’s Diversity Committee expressed pride in the students saying, “They all worked especially hard and made the day a great success, one to truly honor Dr. King’s legacy.

The day culminated in a special assembly where Grades Four through Eight payed tribute to Dr. King and other civil rights activists through artistic presentations including music and readings. The Fourth Grade opened with a performance of Ode to Joy on the recorder followed by the Fifth Grade who sang John Lennon’s Imagine. Afterwards, Fifth Grader, Olivier Rhuma, performed Amazing Grace on the Piano and recited a poem he wrote along with fellow student, Frankie Diaz. The Sixth Grade then had each of their class members recite a short speech from the point of view of African Americans who broke down boundaries like; Jackie Robinson, Hank Aaron, Sojourner Truth, and Coretta Scott King. Seventh Grade came next with a special Eurythmy performance featuring vocals by the Eighth Grade. The assembly concluded with a powerful reenactment of the Birmingham protests of 1963 including a reading of Dr. King’s famous Letter from Birmingham Jail. You can see a portion of the Eighth Grade performance below.

High School Chair Roland Rothenbucher shared with the high school students his pride in  their efforts, recalling a quote by poet, Kahlil Gibran, saying, “Work is love made visible.” Mr. Rothenbucher thanked the students for their efforts and he looks forward to continuing this meaningful tradition next year.

You can see more photos from the day below. 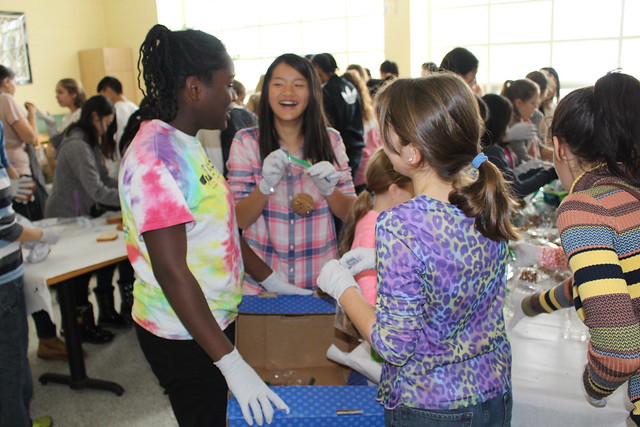