The Little Sponge that Could Launch a full-scale musical theater program in a high school of fewer than 100 students? No problem. Launch an elaborate Broadway-based production with complex moving sets, a daunting number of costume changes, multiple challenging lead parts, a large ensemble cast, audience interaction, and several different styles of dance, including tap and hip hop, DURING a pandemic AFTER two years of not performing at all? Absolutely!!

Director Andrew Fallu, our music and chorus teacher, who one could argue is our real-life SpongeBob, took on the seemingly impossible critically acclaimed Broadway spectacular, SpongeBob the Musical, this winter. After only moments into the show, it became clear that this unusual choice for a Waldorf play was, in fact, the perfect story for these tumultuous times. Against all odds and in the face of a looming natural disaster, the unlikely hero and unfailing optimist, SpongeBob, rallies his friends and neighbors to overcome government incompetency, scapegoating, media distrust, xenophobia, dismissal of scientific evidence, and the distractions of misguided hero worship to not only save all of Bikini Bottom but bring everyone closer together. The brilliantly executed jokes and all too familiar themes gave the audience many opportunities to laugh at some of our most frustrating recent current events. The moving and jubilant finale, complete with sprayed bubbles and confetti cannons, was exactly the injection of hope and joy that we all needed, especially our children. With about half of all high school students involved in this monumental undertaking, many of you might be aware that the successful completion of the three-performance run on March 18th and 19th was as miraculous as Bikini Bottom’s survival of a huge volcanic eruption. Despite illnesses, injury, numerous academic, extracurricular, and practice space conflicts, and no full dress rehearsal, the cast and crew shoved aside all anxiety. They showed up for opening night, channeling the unbridled enthusiasm of their titular character. Pumped up after their first solid run-through of the second act just the day before, they took their places behind the curtain. Producer Erin Fitzgerald, Waldorf’s movement and dance teacher oversaw the addition of row after row of chairs as the line to enter the gym grew longer and longer. Anxious parents sat in the audience holding their breath with crossed fingers and toes hoping that their child’s night would, at the very least, end without any major mishaps so that the months of rehearsals and anticipation would not result in yet another disappointment after two years of COVID-induced let downs.

Hilarity ensued even before the curtain rose as the SpongeBob obsessed fan, Patchy the Pirate, played by Sara Fioribello, roamed the audience in search of fellow devotees. After a comical chase by two over-zealous security guards, Patchy was run out of the gym while everyone else was admonished to put away all devices lest they too meet a similar fate. With all eyes focused on the stage, the curtain rose, and each principal character was introduced to the audience. As if recognizing beloved celebrities, the crowd roared, cheered, clapped and stomped their feet. The atmosphere in the gym took on an almost sports arena feel. It didn’t hurt that dozens of high school students from Mr. Fallu’s New Hampshire alma mater, who recently finished their run of SpongeBob the Musical, had come down to show their loud and passionate support. Several cast members noted afterwards that this had an immediate and powerful effect as an attitude of “We got this!” rippled through the performers and crew backstage.

The twenty-one performers delivered each scene with a beautiful blend of outrageous zaniness and heartfelt sincerity. Audience members got chills when the entire cast took the stage and flawlessly blended their voices in the closing number of Act 1, Tomorrow Is. The rousing gospel number, Super Sea Star Savior, had everyone joyfully clapping along as the loony Sardines danced through the audience. Skylar Vernola’s touching and authentic depiction of SpongeBob evoked genuine sympathy and affection. In the first act, her emotional rendition of Simple Sponge moved many in the audience to tears. Darius Daughtry’s comedic timing as the clueless but loveable Patrick left sides splitting each time he took the stage. His euphoric belly button scratching, and slow-motion jet pack rescue scene will not soon be forgotten. Despite being surrounded by over-the-top characters, Holly Marescot gave a restrained and convincing portrayal of the ever faithful and compassionate science geek, Sandy Cheeks, complete with an angelic voice, not to mention an endearing Southern accent. Jaspar Weinberger made the misanthropic Squidward into the character we loved to hate, especially after the lavish show-stopping tap dance number, I’m Not a Loser, choreographed by ensemble member Sasha Kissin. The whimsical and multi-talented supporting cast included Joseph Giumenta as the evil Plankton, Jordan Henry as Karen, his conniving wife, Colin Li as the greedy Mr. Krabs, Octavia Robinson-Fiorillo as the star-struck Pearl Krabs, and Djhinie Keneth Louis as the deadpan media voice of doom. The ensemble supplied a steady stream of laugh out loud antics and one-liners consisting of Ellen Bucalo, Sasha Kissin, Ariana Kata, Margo Cheney, Anna Muska, Coleen Li ThuThuy O’Halogen, Holden Talluto-Hiris, Bella Salvo, Kimmy Sun, and Augustine Gu. As with any splashy (pun intended) musical, every other element of SpongeBob played an important role in creating such a high-energy, emotional experience. Cleverly breaking the “fourth” wall in a number of scenes, cast members interacted directly with the remarkably talented pit orchestra. Led by Mr. Fallu, the pit featured not only professional musicians, but three Waldorf high schoolers as well: Joshua Wang on violin and Claire Xue and Johan Geng on keyboards. Students, staff and parents helped create the hand-built and carefully painted charming sets under the direction of high school English teacher, Deidre Somers, and woodworking teacher, Martin Somers. ENL teacher, Christopher Garcia, patiently led the choreography for a cast of mostly novice dancers. With a record number of costume changes for a Waldorf production, parent, Sue Cheney, assembled and created the vibrant, whacky outfits of Bikini Bottom. Even the hard work of the behind-the-scenes stage crew (Aaron Bertoni, Talia Mallah, Longren Yan, Zoe Case, Viresh Chandra, Florent Rhuma, Dylan Podlinski, Ava Podlinski, Chloe Kritas, Eva Lu, Sanaalee Troupe, Lilla Lee, and Tyler Royal) took center stage in Act 2. Audience members watched in disbelief as several crew members pushed and spun a set of stairs and platforms around the stage while performers balanced on top as they simulated the dramatic scaling of the volcano– a complicated and risky scene that was conceptualized only two nights before its debut.

It was no surprise that the audience leapt to its feet for an excessively loud standing ovation as the cast members took their bows at the curtain call. Moments later, performers flooded into the gym to hug family members, some with tears of relief and joy streaming down their faces. Mr. Fallu stood in the pit shaking his head as if he had imagined the whole thing and would soon wake up.
Thanks to hope, hard work, and collaboration, it was clear that our Bikini Bottom was going to be okay after all. Of course, SpongeBob knew that all along.

Enjoy this beautiful gallery of photos taken by Iwonka Piotrowska and Brandon Goldner of SpongeBob the Musical. 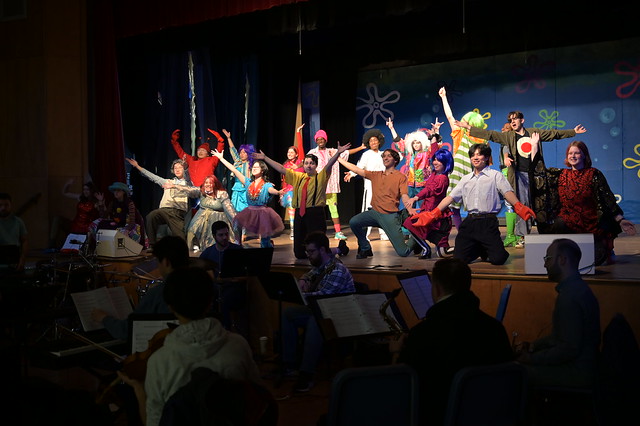